Skye, Dalmally - and a masterclass!Donald Sinclair - spinning wheel maker of ArgyllWelcome to my new blog spotIndex

Remembrance, reflection – and being thankful.

A sombre blog this time. In this year of remembrance and centenary of the end of World War 1 there has been much interest in communities and in families of the stories of individuals who survived or perished whist serving in that truly awful war.

In my own family, on both mother’s and father’s sides, the tendency was NOT to discuss it. There were/are sepia photos of kilted soldiers, or sailors in uniform whose names were never mentioned and whose stories were never discussed. Questions as to “Who is this in this photo?” were batted aside or the barest of information given before the subject was emphatically changed. I recall my father’s answer to my childish question as to who the young kilted soldier was in one such faded photograph. “Oh, he was the first Archie Barbour. He died in the Great War.” Dad was also Archie Barbour. He then changed the subject and would not be drawn further on it. It is only now that I realise that he was my great uncle.

Looking at the photo now with adult eyes I also realise he was so very fresh faced and young, and with such a good-humoured smile, he looks like a guy I would have enjoyed chatting to and spending time with. He was aged 20 when he died in France in the summer of 1918 and had been married just 18 months.

My husband also has a photograph of a great uncle who fell at the Somme, aged 34. His picture shows the vibrant and good humoured face of a man full of life.

On my mother’s side there were many similar photographs but, in her 90s, she recalled that nobody spoke of them, or answered questions as to who they were. “None of your business;” or “Ask your Father”, being the brush-off responses which choked off childish curiosity. Unfeeling and uncaring? I don’t think so: more likely a closing-off of a subject which was still too raw and painful to deal with at the time. And so the pattern was set.

So many families, in so many places, had similar stories which have left gaps and voids in family histories and so many What ifs? and such unfulfilled potential in so many lives cut short.

There is, however, one centenary being marked this New Year on the Isle of Lewis, in Scotland’s Outer Hebrides, which has an extra layer of cruelty and awfulness to it, namely the loss of the HMY Iolaire. This loss remains the second worst peacetime disaster at sea since the Titanic.

On 31 December 1918, at around 7.30 pm, nearly 300 weary men were packed aboard the yacht Iolaire at Kyle of Lochalsh, returning veterans of World War 1, mostly Royal Naval Reserve, eager to be home with loved ones at the start of the New Year and also eager to pick up life in peacetime, having survived the horrors of the Great War.

All over the Islands of Lewis and Harris families were preparing for the return of their menfolk and for celebration of the New Year of 1919. At around 2 am on the 1st January 1919 – and very close to Stornoway harbour – the Iolaire foundered on the notorious reef, the Beasts of Holm, just yards from shore and safety. A series of errors and increasingly stormy weather resulted in the Iolaire overshooting the entrance to the harbour and, of the roughly 280 men aboard there were only 79 survivors. Of the ship’s own crew all four officers were drowned and only seven hands survived. Irony piled on cruelty – many of the veterans could have guided the ship into harbour in waters they knew so very well.

In the midst of the confusion and turmoil after the Iolaire struck the reef it was down to the passengers, for the most part, to organise things for themselves. One man emerges as a true hero amongst many. John Finlay MacLeod from Port of Ness, Lewis, a boat builder to trade and a man with intimate knowledge of the waters around Lewis and Harris, managed to tie a throwing line to his wrist and swim ashore with it. Waiting for the third wave – which he knew would be the strongest, he managed to scramble onto the razor-sharp rocks and plant himself precariously on a narrow ledge and wrap the rope around a boulder to give him purchase. A thicker rope was tied to the throwing line and John Finlay MacLeod then held it steady with supreme effort to allow men to use the rope to escape from the wreck. All this in the pitch dark with a surging sea and in his stockinged feet. Around half of the 79 survivors made it thanks to John Finlay and his rope.

The devastating effect of the loss of such a high number of able-bodied men from such small communities cannot be overstated, depleted as they already were by the ones injured or fallen in battle. The hurt went so deep that it was hardly ever discussed for a great many years , but now, in the centenary year, there is a wealth of events, works of art and music to commemorate victims and the survivors of the Iolaire Disaster, An Lanntair centre in Stornoway being the site for much of these events. 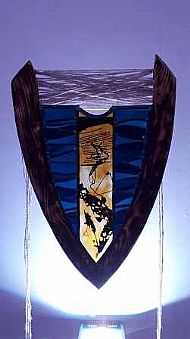 Alec Galloway, stained glass artist and painter (and a friend and former neighbour) produced some stunning pieces for the exhibition, Bho Mhoch gu Dubh: From Dawn to Dark. He gathered scraps of wool from around the Iolair monument in Lewis and asked if I could spin it up into yarn to be incorporated into one of his pieces 79.Harp There were 79 strands of yarn, one to represent each survivor. I was very honoured indeed to have had a very small part in this most moving commemoration.

For those of you able to see BBC Alba, there are numerous programmes on about the Iolair all day on 1st January 2019. And An Iolaire: Bidh sinn a’ cuimhneachadh (Remembering the Iolaire) will be broadcast on Tuesday 1st January, at 8pm on BBC Alba. It shows various artists’ responses to the Iolair Disaster and includes Alec’s work. 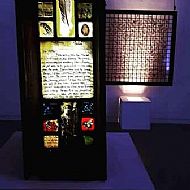 Light box showing a letter home and objects such as an engagement ring, and presents for the family, which were never received. 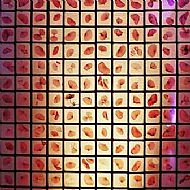 201 poppy petals, one for each life lost.

(All pieces by Alec Galloway.)

Looking forward to 2019, may I wish you all a Good New Year and the best toast of all: slàinte, sonas agus beartas! (Health, wealth and happines.)

Comment from Linda Young at 17:09 on 25 February 2020.
Very moving---thank you for the beautiful telling of the story

Please note that whenever you submit something which may be publicly shown on a website you should take care not to make any statements which could be considered defamatory to any person or organisation.