I thought that I would share a tale about a Scottish spinning wheel maker and the links between spinning and wheels and some of my family history.

It will, perhaps, be like a Billy Connoly monologue – that is, it may appear to meander aimless and unconnected in time and narrative but, hopefully will all come together in a logical and connected conclusion....so here goes.

Back in 2008 our group, Sgioba Luaidh Inbhircluaidh, were invited to run waulking song workshops at Woolfest, Cockermouth in Cumbria. The workshops proved so popular that we were in great need of another piece of cloth for the classes and I went in search of some on the Festival floor hoping that a kind vendor would let us borrow some cloth. The kind vendor who agreed to let us have temporary custody of some material happened to be situated near the stand of the Long Draw Spinners where Val & David Bryant were demonstrating long draw on a beautiful Muckle/Great Wheel made by David. Beside this David had a huge black and white photo of a 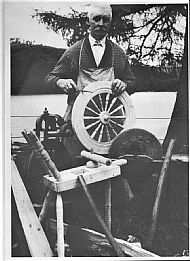 moustachioed gent standing beside a collection of spinning wheels in various stages of construction and in a couple of styles. He was apparently standing under some trees at the edge of a body of water. The caption was "Donald Sinclair, spinning wheel maker, Argyll, Scotland". The photo is of DS at his workshop opposite his house in Portsonachan, house name was Auchnacloiche & he is seen beneath the larches planted to mark the Jacobite rising of 1745 (as stated in the book It's a far cry from Loch Awe by Charlie Mitchell)

This piqued my interest and I enquired of David as to where in Argyll Donald Sinclair had lived and worked, to which the response was "Portsonachan." David went on to explain that D.S. (and before him his father – also D.S. Working from Glen Orchy) - was/were a well-regarded Scottish spinning wheel maker(s), and their castle type wheels in particular were unique in design as they had horse shoe shaped arches over the maidens. The maker's mark of the Sinclairs was also a horse shoe complete with the nail marks, D.S. and, on occasion, Portsonachan. He also explained that the wheels, and in particular the castle type, were very rare and that he had only ever seen one in the National Museum of Scotland in Edinburgh. D.S. jnr. had ceased making wheels around the end of the 1930s.

This information fascinated me and I explained that my Mum - born in 1920 – had been brought up on a hill farm near Portsonachan and that I would enquire if she had heard of D.S. or his wheels when I got home. We both carried on to enjoy the rest of Woolfest.

When I got back from our trip I mentioned to Mum that I had "discovered" that there had been a spinning wheel maker at Portsonachan and marvelled at how close to Mum's childhood home he had been. "Och yes," she replied matter of factly "Donald Sinclair. I remember walking down with your Gran to visit the Sinclairs at Portsonachan and I mind seeing the old man working on his wheels too. His wife had one of the most wrinkled wee faces I had ever seen" a pause -"and your great uncle Lachie married their daughter Annie!"

Of course I e-mailed David Bryant and relayed this information & it turned out that in 1990s David and Val were engaged in a large project to track down and list spinning wheels all over the U.K., and in 1996 they had visited Portsonachan and, from talking to locals discovered D.S.'s house across the road from the Post Office –by this time the workshop had been demolished. They were directed for more information to a local hill farmer – one of my Uncles - who in turn put them in touch with one of D.S's granddaughters who lived then in Clarkston & she in her turn directed them to another cousin in Glasgow who it was thought had a D.S. wheel - but this proved to be incorrect and so they hit a dead end until my e mail revived the search.

Val put an advert in the Oban Times requesting any info ref D.S. wheels and got only one response from a gentleman in Knightswood (probably another cousin) who said he had one of "Uncle Donald's wheels in the attic" it was not dated but did, he assured, have the horse shoe marking. However this gentleman refused any callers ref the wheel and photos he said he would forward never materialised. We were not in regular touch with this branch of the family so that was a frustrating end to this part of the search.

I then had the great fortune to see this wheel – a part of the MacDougall Collection –on display at a wool festival in Benderloch. To my eyes at least it is a D.S. upright wheel with horseshoe arches. 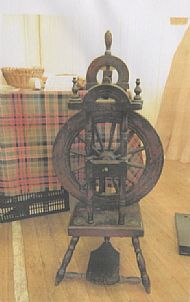 Moving on to 2010 there was a new magazine about spinning in the U.K. - Yarnmaker - and I began to contribute articles to it amongst which was a piece about the search for a D.S.wheel. It prompted a reader to send me the following cutting from-of all things - the Toledo Bugle from 1942(Ohio, U.S.A.) 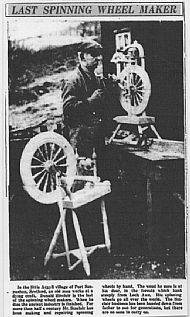 Moving to 2011 when the editor of Yarnmaker, spotted a very damaged DS traditional wheel for sale on e-bay - no flyer or bobbin and lots of worm damage, but marked with the horse shoe, and for sale somewhere in Derbyshire. After a nail biting auction on ebay it was secured for me and Dot kindly brought it to Woolfest. It went to a friend of my husband for refurb where it still is as he has had health problems but, in another serendipitous happening another reader of Yarnmaker in Nottinghamshire, had read of my wheel and traced the flyer and bobbins to aid replication as she has a fully complete D.S. traditional wheel and delighted to have info ref the maker.

Life events took over - I became full time carer for Mum, and fibre related matters went largely on the back burner for a protracted time. Yarnmaker is sadly no more –the last issue being in 2016.

The wheel turns once again on events – one of my friends in Sgioba Luaidh, who was living in Dunoon then, acquired a spinning wheel from a friend whose late aunt - an accomplished spinner – had it in her loft. A traditional Highland wheel complete with flyer, it had maker's mark - and guess what? It is a D.S. wheel. It was missing a distaff but the distaff on "my" D.S. wheel was used to enable a replica to be made so my friend now has a fully functioning and complete D.S. wheel. Isn't it amazing how the wheel turns and wonderful things happen?

Comment from Jill at 22:02 on 26 May 2018.
Have love the story of DS since the first time you told me .. so delighted to see it out there for so many others to enjoy, and the story grows. Looking forward to more woolly stories on my favourite Waulking site :)
Comment from Freda adrysdale at 13:18 on 28 May 2018.
Hi Inner
What a brilliant story !
I remember seeing the Donald Sinclair photo in another book on spinning and weaving but don’t ask me which one !
X
Comment from Dot Lumb at 19:24 on 03 June 2019.
Hi Innes, I looked your waulking group website because my sister was telling me how she'd got her YarnMaker magazines out to re-read your articles after seeing the waulking scene in a recent episode of Outlander. How super to find you have a blog here and learn the latest development in the story of Donald Sinclair's spinning wheels! That D.S. wheel I collected for you is one of the most elegant spinning wheels I've seen and it was a joy to have it in our home for a while before it travelled on to you.
Comment from Dougie Hutton at 23:17 on 15 April 2020.
Hi Innes. I came across your article when I was researching some family history. I'll apologise in advance as my contribution has nothing to do with waulking! The article had a strange familiarity to it. Donald Sinclair is in fact my great grandfather on my mothers side. My mother Margaret was born in Portsonachan in 1925, eldest of four children. Margaret, Catherine, Flora and Lachlan. The hill farm mentioned earlier could be the nearby Accurach Farm. I remember my parents visiting there when I was a child.-...."and your great uncle Lachie married their daughter Annie!" are my grandparents Lachlan McInnes and Annie Sinclair. The cousin in Busby near Clarkston would have been my aunt Catherine (as above) who may have re-directed the enquiry to my mother. My family recall having relatives in the Knightswood area but they are on my fathers side. My father was Duncan Hutton. My mother passed away in the year 2000 and I regret not having asked many more questions of her childhood in Portsonachan. I believe that Annie passed away in 1937 following persistent illness and my mother aged 12 years had to leave school and help to raise her younger siblings. With regard to spinning wheels, I recall a story that a D.S.spinning wheel that was in my mothers family was taken as payment by the doctor who attended Annie. I am unable to verify this.

Please note that whenever you submit something which may be publicly shown on a website you should take care not to make any statements which could be considered defamatory to any person or organisation.